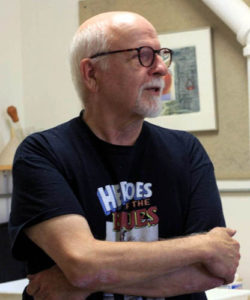 Neil Harpe was born and raised in Annapolis, Maryland. He approaches his art through a variety of mediums and often combines several of these approaches in a single work. Harpe is particularly known for his marine art. However, he covers a wide range of subjects and themes in his artwork.

Neil graduated from 4-year program at the Corcoran School of Art in 1969, with a major in graphics and minor in painting. He received a BFA in multi-media from Maryland Institute College of Art and MFA in printmaking from George Washington University. He spent three semesters as a visiting graduate student at the University of Maryland, where he studied color lithography with Tadeusz Lapinski.

While at George Washington University, Neil’s thesis advisor and former drawing professor was realist painter and printmaker Frank Wright. His association with Professor Wright had a major influence on Harpe’s later near “photo-realist” work. After earning his MFA, Neil produced more than two dozen editions of mostly Chesapeake Bay themed Mylar lithographs. Most were produced under the direction of esteemed Mylar lithographer Mel Hunter at Atelier North Star in Burlington, Vermont.

Along with his representational work, Harpe also has an ongoing series of geometric acrylic paintings. These works are reminiscent of non-objective work he did as a student at the Corcoran School of Art, where he studied with “Washington Color School” related artists Tom Downing and Ed McGowin.

After earning his MFA, Neil taught various studio art classes at Northern Virginia Community College.  In addition, he taught lithography at the University of Maryland’s University College. As a lithography specialist, in 1978 Neil was called upon by his former printmaking teacher Jack Perlmutter to set up and teach in a newly established stone lithography studio at the Corcoran. Most recently, Harpe taught printmaking at Maryland Hall of the Arts in Annapolis.

Harpe’s lithographs were included in the “Art in the Embassies Program” of the U.S. State Dept. and displayed at U.S. Embassies throughout the globe. His artwork is in many private and corporate collections, including the permanent collection of the U.S. Naval Academy, the Beverly Robinson Collection of Naval & Marine Art, Calvert Marine Museum, and Westinghouse. A series of Harpe’s abstractions based on mathematical proofs are on permanent display at St. John’s College, Annapolis, Maryland.